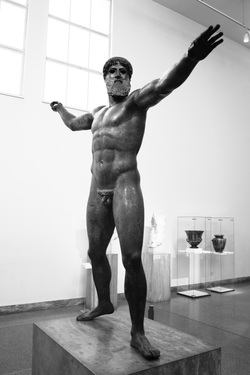 The Artemision Bronze is a slighter larger than life statue recovered from the sea off Cape Artemision that represents either Zeus or Posiedon; the right had either originally holding a thunderbolt, or a trident. The statue's creation dates to c. 460 BC before the development of the classical style in the later half of that century, however, the context in which it was found was much later, around the 2nd C. BC, presumably part of a sunken Roman ship's cargo. The  statue was found in 1926 and then excavated in 1928, it currently holds a prominent position within the National Archaeological museum at Athens. A cast of it can also be found at the cast gallery of Cambridge University's Museum of Classical Archaeology.